I couldn’t resist playing a joke on Hubby when he I visited Uncle Bucks Grill a few months back. If he didn’t have a sense of humor, then I might have been in trouble. It all revolved around an appetizer that I ordered with lunch. 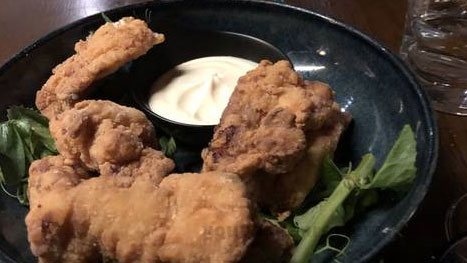 Our afternoon began innocently enough. We walked into Bass Pro Shops in Kodak, Tennessee to look around. Hubby announced that he was hungry almost the minute we walked in the door. He had to step away and asked me to order iced teas.

That’s when the thought hit me. Why not order the alligator tail appetizer? We talked about trying it but hadn’t gotten around to ordering the dish yet. Today would be the life changing day!

I asked the server to keep it on the down low when he brought the dish out.  This way, my husband could try the food without preconceived bias.

Hubby raised an eyebrow when he came back and saw the plate. He asked what it was but seemed reassured when I replied “chicken”. (We have each heard stories about how one meat or another was passed off as chicken. Hubby really didn’t seem to believe me but played along.)

He took slowly took one bite, then another. Then he pronounced that Uncle Buck’s Grill makes the best “chicken bites in Kodak”.

That meant that it was confession time.

It took a few seconds for what I said to kick in. I think he was waiting for a punchline that didn’t come. It was a relief he laughed and shrugged his shoulders. He liked the alligator bites appetizer as much I as enjoy his sense of humor. The twist to the meal gave us something that we still laugh about.

However, you know what they say about paybacks? I’m waiting for a moment that is sure to come. If he sits something strange down in front of me and declares it to be chicken, then I’ll know that I’m in trouble!